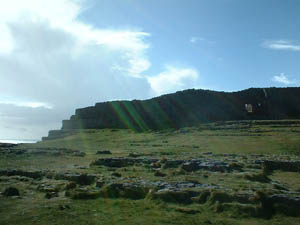 Many people say that Galway is beautiful and hard to leave behind. But it’s also located so well that it can easily be seen as the epicenter for discovering the West Ireland and most of the southwestern and northwestern destinations are merely a few hours ride away. Thus, day trips from the city are a great way to explore the area and spice up your vacation.

Arans Islands are considered to be splendidly unique. It holds the stretch of precipices in front of the Atlantic’s moods. It also has the landscapes of limestone rock, rock formations, large boulders and oddly clean beaches. Also, the place is complete with vast cultural history and heritage. The first language of the residents in this island is called Gaelic language. It is deemed as the traction of the culture of Ireland. The Aran Islands themselves serves as an open-air museum of cultural and religious artifacts. The islands has three islands namely, Inis Oírr or the East island, Inis Meáin or the Middle island and the Inis Mór or the Big Island. All of these are located in the south easterly and north westerly direction at the opening of the Galway Bay.

There are regular ferries from Galway to Aran Islands.

The Burren is located in County Clare, in the south part of Galway. Burren got its name from an Irish bhoireann which means a stony place. The formation of the Burren has remained pure from the time of the ice age and is consisted of karstic limestone, known as the biggest location of such in the west part of Europe. Burren is regarded as a region of revelation and enchantment to archaeologists, ecologists and botanists and takes up an area of about 300 sq. km.

Located on the Cullenagh River, Ennistymon is near to numerous tourist spots in the continent of Europe such as the Cliffs of Moher and The Burren. For this reason alone, Ennistymon makes a great base for discovering the natural as well as the historical affluence of the West Ireland.

Cliffs of Moher is known as one of the top tourist destinations of Ireland. The Cliffs range for eight kilometers and are 214 meters high at the utmost point above the Atlantic Ocean on the west coastline of the County Clare. On the promontory of the magnificent cliff you can found the O’Brien’s Tower proudly standing. From Cliffs of Moher, you can witness the splendid Galway Bay, the beauty of Aran Islands in addition to Connemara’s Maum Turk Mountains, the Twelve Pins and the Loop Head on the southern part.

The Cliffs also serves are a home to one of the top colonies of nesting seabirds in the country. The location was chosen to be the Refuge for Fauna in the year 1988. In 1989, it was designated to be the Special Protection Area for Birds. Incorporated within the chosern site are the cliff-top marine prairie and moorland, the cliffs and the 200-meter area of open water, straightly at the front of the cliffs to guard the feeding area of the birds.

Situated 78 kilometers away from the northwest of Galway, Clifden is the biggest municipality in Connemara and is considered as the capital of this district. Located between the 12 Ben Mountains, Atlantic Ocean and the conserved bog lands, lies this beautiful municipality of Clifden.

Blessed with stunning scenery, horse riding, golf championship, cycling, beaches, walking, fishing, painting, scuba diving, hill walking, abbeys, castle ruins, national parks and more than 5,000 of existing history, Clifden is a location that is finally identified as a new famous destination and not only a location to breeze through.

The only way to get to this stunning city is either by public bus (which run from all major cities and airports) or by tour bus. Each summer the city is jam packed with tourists so it would be best to avoid the summer peak if you don’t fancy crowds.

The Bunratty Castle is regarded as the most absolute genuine medieval citadel in the country. Constructed in the year 1425 it was renovated in 1954 to its previous medieval grandeur and now houses most tapestries, furnishings and art works which confine the mood of the 15th and 16th century. At the present, the castle peacefully stands in enchanting grounds. The cottages and houses sprawling at the base of its huge walls, much in the manner that the crofts and cottages of old would have gathered around its foot. It would be ideal to have a trip around the castle and wonder at the best compilation of medieval furnishings in Ireland that give life to the significant part of the medieval history.

There are two ways to get here: by public bus or by rental car.