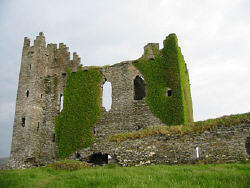 One of the iconic images of Ireland is surely a stark and imposing castle set against a hillside of impossible greens. Visiting castles in Ireland is a great way to learn about the country’s history while at the same time soaking in amazing views.

Throughout Ireland, you will find castles which are restored or intact and some which are nothing more than ruins. Rather than just being the residences of the nobility, Irish castles were built to protect their inhabitants. Many have fortified walls and towers in addition to the virtually impenetrable buildings themselves. The interiors of most castles are quite dark for lack of windows, and most rooms are quite small. In short, these are not the palaces of modern-day royalty we are dealing with!

Here are a few of the castles you can visit in Ireland:

While touring Ireland castles may be enough for some people, others want the experience to be a bit richer – which is why many Irish castles have been restored, modernized and opened up as hotels. Yes, you can actually sleep in some of the castles in Ireland. And if you are prepared to really splash out some money, some castles can even be rented by the week (yes, the entire castle).

For a good list of castle-related terminology, see this page.