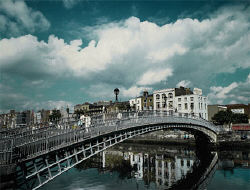 Ireland’s capital city of Dublin is a vibrant and exciting place, popular for years for weekend city breaks from Europe and the starting point for almost every trip to Ireland. The country itself might not be huge, but Dublin is home to more than 25% of Irish citizens – so there is always something going on in Dublin! The good news for travelers, however, is that the part most tourists will want to concentrate on still feels somewhat like a small town center. Those staying in Dublin and not venturing further into Ireland will not even need to think about renting a car, as Dublin’s city center is easily navigated by walking.

Dublin is one of the fortunate Irish cities to have a river running through its heart. The River Liffey not only provides pretty views, it helps with orientation for foreigners as well. The river’s northern side is where you will find most of the concentrated shopping areas, including the well-known Henry and Talbot Streets. On the south side of the river are such attractions as Trinity College, Christ Church, and St. Patrick’s Cathedral. Both sides of the river have plenty of restaurants and other eateries, as well as places to stay.

Be sure to read these indie travel tips for visiting Dublin.

Getting to Dublin is easy – you can find flights to Dublin Airport from just about any city in the world, as it’s the main international gateway for the entire country. It isn’t, however, the most major international airport in Europe, so you may look into finding a super deal on a flight into a different city (like London or even Paris) and then getting airfare to Dublin on a smaller European airline. The combination could save you money.

Here are some ideas of what to do in Dublin:

In addition to the city’s attractions, many people come to Dublin to shop, eat and drink – and if you are one of those people Dublin will not leave you disappointed. The city’s main shopping streets are Grafton, Nassau and Henry, but there are all kinds of shops dotting the city center. Irish food has come a long way since the potato famine, and you are just as likely to find very high-end dining in Dublin as you are good old fashioned pub grub. No matter what your price you are sure to find something to satisfy your hunger.

Of course, Dublin is renowned for its thriving nightlife, so you would be missing a big portion of what makes the city famous and fun if you did not visit a few pubs during your stay. The Temple Bar area seems to be pub after pub, and is a popular spot for tourists, but drinks can be more expensive there than in the more traditional Irish pubs which are not around Temple Bar. And while traditional Irish music enthusiasts will want to have the city of Doolin on their to-visit list, there are even a few truly traditional pubs in Dublin where you can hear traditional Irish music, too. Smokers be aware – smoking in Irish pubs is illegal, so you will have to go elsewhere to light up.

If you do not want to walk all around Dublin, there is also a bus system and a couple of local tram services. These can be used to get around the small central area of the city, and are essential if you hope to visit any of the more suburban areas without a car. Most buses do not run past 23:30, and those that do are called “Nightlink” – these run from midnight until around 02:00 (04:00 on weekends). Taxis are not as plentiful as they are in some cities, so you may need to call ahead to reserve one. Finally, you can also rent a bicycle if you want! The only company that exclusively rents bicycles is at the main entrance to Phoenix Park, which is handy because biking through the park on a nice day is a real treat.