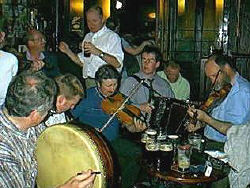 To say that pubs in Ireland are important to Irish society is, without question, an understatement of the grandest proportions. Far more than just a place to drink, Irish pubs are often the social center of a town, where neighbors catch up on the local gossip while watching sports on television or listening to some traditional Irish music. And pubs in Ireland can serve much more than the usual stouts, ciders and ales, although those are always available – many Ireland pubs serve good pub grub and most will also be able to set you up with a pot of tea as well.

The term “pub” is short for “public house,” which helps to demonstrate the social nature of Irish pubs even today. They are often just as much considered meeting houses as they are places to get a drink! Of course, even with all this emphasis on the social aspect of pubs, they are certainly the places to go to get a good Irish pint. The Irish are notoriously heavy drinkers, so although you will see many people hanging around in pubs without getting completely drunk, do not be surprised if a few people get out of control – especially in the cities, and especially on the weekends.

Smoking and pubs once went hand in hand, but since March of 2004 there has been a smoking ban in place in all workplaces, including pubs and restaurants (you may not be working there, but someone is!). Since the ban took effect, there have been debates about whether it has increased or decreased traffic in pubs, but a majority of the Irish people – including smokers – still support the ban.

Some accounts say that there are more than 11,000 pubs in Ireland, one for every 300 Irish people – men, women and children included – so it would be quite a feat to attempt to list them all here (or anywhere, for that matter). Instead, rest assured that there will be at least one pub (often more) in any town in Ireland you choose to visit, and all it takes to make your pub experience memorable is being willing to be social with the others in the pub.

You may want to try this Ireland pub guide to find the pubs in the places you will be visiting, and don’t forget about the oldest pub in Ireland.