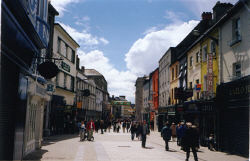 Galway is is one of Ireland’s largest cities, and has long been a gateway for visiting the western parts of the country. But more than just a stopping point en route to other sights, Galway is an interesting city in which to spend a few days.

Known as the “City of Tribes” because of the many merchant families which once ruled the city, Galway retains something of that multicultural attitude even today. This is a city that knows how to have fun, whether that means the outgoing warmth of the locals which visitors can experience every day of the year, or the busy summer festival season when the city truly comes alive. With more than 50 festivals held in Galway each year, it is likely that you can time your visit to coincide with one – and seeing a city in its festival finery is one of the best ways to see a city!

Some of the festivals held annually in Galway are:

But if you are not lucky enough to visit during one of Galway’s festivals, there is still a reason to stop in this city. As mentioned, it is an ideal gateway point for visiting West Ireland, and makes a great homebase for making day-trips to nearby sights like the Cliffs of Moher, Aran Islands, The Burren and the Connemara. There are plenty of hotels and B&Bs, and even a few hostels, where you can base yourself for a few days. And when you wake up one morning and do not feel like hopping in the car or on a bus to see something in another town or over that nearby hill, rest assured you can spend a lovely day exploring Galway, too.

Here are some of the things to do in Galway:

Galway’s nightlife varies between traditional Irish pubs and more modern nightclubs and bars, so if you do not find what you are looking for immediately – keep hunting in the city center and you should find it after awhile! For a reference guide to Galway’s pubs, check out the Galway City Pub Guide.

And be sure to read more information about visiting Galway.