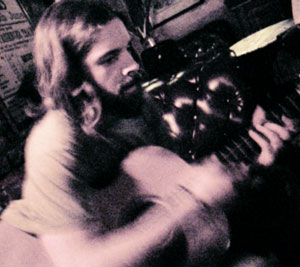 It had been a while since the bean and myself walked out to the Shack and, seeing as there was a break in the rain, we decided the evening was perfect for a stroll.

Ze germanz relieved us of carrying the instruments out (though we’d return with them across our backs later) and we had a lovely stroll over, the bean waxing enthusiastic about having received the parts for building a guitar. Yes, the bean is going to make his own guitar from scratch – watch this space!

In any case, we arrived at the Shack and our unassuming gentleman from the other week (pictured left bustin the moves) was there waiting at the table. I have since discovered that his style of guitar playing can be attributed to Preston Reed, who invented that style of playing. At one point I pulled out the aul bodhran and accompanied him. It sounded like this. Rawk!

The last couple of Shack nights have been great craic, and this was no exception. We even got a leetle taste of 3-part harmony on some Bob Dylan thusly. What a great night of music.