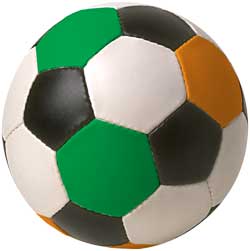 It rhymes. It also pretty much sums up the situation for Irish world cup soccer.

While the pundits lambast the coach and more than a few Irish players nurse serious injuries, tonight’s loss to the Czech Republic pretty much means that Ireland will not be playing in the 2008 European cup.

It just doesn’t seem that long ago that I awoke around 6am in a Munich hostel with just one thing on my mind. Closing the door behind us, wifey and I traipsed across the still slumbering German city. At that early hour of the morning the sun had yet to slip her fingers down past the rooftops and it was through a lingering chill between the buildings that we approached a nondescript wooden door and descended down a flight of stairs.

As we opened the door at the bottom a burst of heat, noise and colour assaulted us. A young man with his face painted green, white and orange wore an Irish flag as a cape and, hoisting a pint in one hand, screamed his enthusiasm for the match happening behind him on a projection screen. Hot plates of Irish breakfasts were negotiating their way, held high above the crowd and several pints of stout were on the settle at the bar.

When the goal was scored in the last minute, saving Ireland from disqualification, I remember leaping into the air when an equally enthusiastic (and much taller) guy next to me roared as well and made to embrace the closest person to him – the mid-air me. The next moment, I was crowd surfing over gleeful Irish faces all screaming their triumph down in that little, underground Irish pub in Germany.

Ah, 2002 – wasn’t that a year for hope? Now, in the aftermath of our loss to Czech tonight, I can’t even manage the will to make a decent quip.