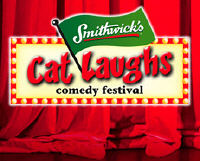 If you need an excuse to head to Kilkenny in June, the Cat Laughs Comedy Festival is a great one – in addition to the usual sights of Kilkenny, this festival gives you an excuse to laugh yourself silly.

Kilkenny’s Cat Laughs festival has been going since 1995, and has featured lots of famous international comedians over the years – even the likes of Bill Murray and The Daily Show’s Lewis Black have appeared on the Cat Laughs stage in the past. Generally, it’s a great festival for British and Irish comedians to do their stand-up routines.

In addition to the stand-up comedy component, the Cat Laughs Comedy Festival also includes a comedy film element called “Kitty Flicks,” as well as a soccer game that’s held each year where the Irish comedians take on comedians from the rest of the world. This sporting event is just as much comedy as it is soccer. Even before the match in 2007, there was a preview of the match by the entertaining announcer, Barry Murphy, which you can see on video.

You can see the official website for Cat Laughs; the 2008 site isn’t live yet, so the lineup hasn’t been listed – but the dates for this year are May 29 through June 2. So even without knowing who’s going to appear when, you can certainly begin planning your trip to Kilkenny today.

In previous years, organizers have had a way to book tickets online as well as by phone or in person. You can learn more about booking tickets in advance, even before the website goes live for 2008.