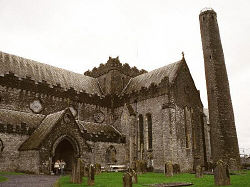 As far as cities go, Kilkenny is a small one. But with an impressive restored castle and cathedral, not to mention lots of medieval buildings, Kilkenny is a delightful place to visit and is popular with foreigners and Irish weekenders alike. The city is situated on the banks of the River Nore, and is only 90 miles from both Cork and Shannon, so it is easy to visit on a day trip if you do not want to stay longer. But you do want to stay longer. Trust us on this one.

Some of the things to do in Kilkenny include:

Some attractions in Kilkenny are more seasonal, such as the Smithwick’s Cat Laughs Comedy Festival which occurs each year in early June. It is a well-known festival which attracts lots of famous comedians and includes a soccer match held where it is Irish comedians vs. the rest of the world’s comedians, and that is always good for a bit of entertainment. The Kilkenny Arts Festival takes over the city in August. If you would like to attend either festival you should plan to book your accommodations well in advance. Irish sports are very popular in Kilkenny as well, and the city’s hurling team has won the Irish championship 30 times.