Moydrum Castle and U2 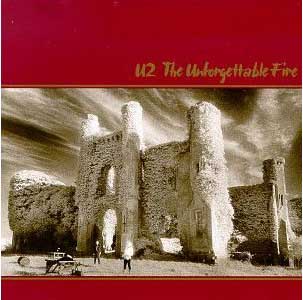 Moydrum Castle is located on private land and, as such, is not necessarily frequented by tourists. The castle is viewable from the road, however, and U2 fans might get a little thrill standing where the band stood for their picture of their 1984 album The Unforgettable Fire.

The castle itself was built by a British landlord named William Handcock who inherited the land (several thousand acres) granted to his family in 1680 following the Cromwellian occupation of Ireland. William actually opposed the Act of Union, there are records of his speaking against it and refusing generous bribes from Britian, until he was offered a title and flip-flopped politically, voting to unify Ireland and England. In 1812 he got his title, becoming a baron, and built a castle he felt befitted his new status in Moydrum. 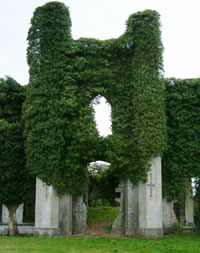 In 1921 British Black and tan troops forced their way into the Coosan homes of three local Irish farmers in a search for arms. Finding nothing, they ejected the families and burned the homes to the ground. The reaction was swift – the following morning the Irish army arrived at Moydrum, a symbol of British tyranny for over 200 years, and gave the inhabitants 15 minutes to gather what they could and leave peacefully. They then proceeded to burn the place to the ground, in retribution for the loss of the farmers’ homes. The facade that remained is what you see standing today.

The Handcocks never returned to Ireland. From Britian, they sold their land back to the newly formed Irish land commission in 1924 who promptly returned its ownership to the local famers – undoing 200 years of wrongful occupation.

From what I’ve heard, even U2 didn’t get permission to stand near the castle and get their photo taken. Bono and the boys just hopped the fence, snapped their photo and put it on the album – cheers! I’m pretty sure the owners didn’t even get a free copy. *grin* Nevertheless, for years U2 fans have made a point of detouring to this quiet spot and staring at the Irish castle that graces the album cover.

Moydrum is from the Irish Magh Droma, “plain of the ridge”.

To get to Moydrum, take the first exit off the N6 westbound after Kilmartin’s Roundabout. Go right. You’ll see a sign for Mount Temple on your right, take that. A few miles down the road (past ‘Tubs & Tiles’) you’ll see Moydrum forest on your right. Take your next right turn, ignore the next road veering off to your right and you should see the castle.