From Cork to Kinsale 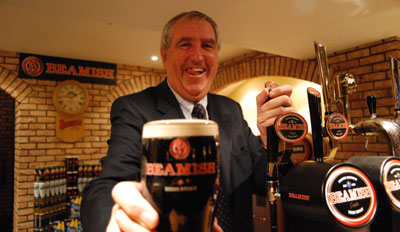 Today was a good day in Cork. We woke early and headed down to the Beamish and Crawford brewery for their brewery tour. The tour is held twice a week in the summer months, but only once a week in the winter. Ray, our friendly tour guide, greeted us in Beamish’s hospitality room, starting things off by offering everyone in the room a pint, despite the early hour.

Sure, what were we to do? 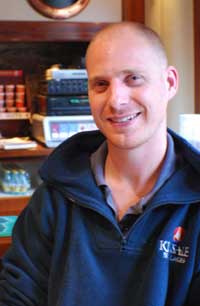 It turns out that Beamish does not host an actual tour of their facilities. Due to health and safety regulations, the actual brewery floor isn’t safe enough to allow tours, so Beamish has set up a hospitality room for their visitors. It’s set up like a pub and has old ledgers and bottles displayed in glass cases. Ray talks about Beamish and the brewing of beer, a video presentation is shown and then visitors can try their hand at pouring their own pint.

We stuck around afterwards chatting with Ray, who is nominally retired and runs the “tour” on behalf of Beamish. He pointed out the ancient lock on the main door (the brewery building used to be a prison) and the stone in front of it that used to hold spikes for the displaying of the heads of executed criminals. Beamish certainly fell on its feet when they hired Ray, he’s the perfect ambassador for them; friendly and down-to-earth with a real love of the aul cant agus Beamish.

After our morning tour, we checked out of our hotel and headed down to Kinsale. I had an afternoon appointment with David, their brewer. David is a quiet, likeable young man, originally from Leeds, and we chatted late into the evening about the Kinsale Brewery (more on that later).

It was, by all accounts, an almost perfect day.