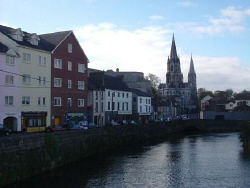 Ireland’s second-largest city, Cork, sits on the River Lee and also boasts one of the best deep water natural harbors on earth, so this is a city with close ties to the water. In fact, the name “Cork” comes from the Irish word “Corcaigh,” which means “marsh.” The city was initially built on marshland, and many of the streets are built on what used to be river canals.

While the city center can make getting one’s bearings a bit confusing, it is thankfully quite small so your best bet will be to explore on foot. There is a network of buses, but unless you are planning to visit the more suburban area (where most people actually live), you will probably not even need to take a bus. Taxis can be found regularly in the central area except on weekend nights when everyone is out drinking and wants a cab.

Flying into Cork is easy if you’re already in Europe, because there are lots of direct flights to Cork Airport from cities throughout the UK and much of Europe. Those of you who aren’t fortunate enough to be in Europe already, however, will likely be flying through another more major city first – like Dublin, London or even Paris. So you might actually find a better deal on airfare to Cork if you book your tickets separately – find a stellar deal on a flight into a different major European hub airport, and then buy a cheap ticket to Cork on a small European airline.

Some of the things to do in Cork are:

Depending on when you are visiting Cork, you may be lucky enough to be in the city during one of its annual festivals. The Midsummer Festival runs from mid-June through mid-July and is an arts festival featuring theater, music and poetry. Cork also has a film festival in early October and a jazz festival at the end of October. If you are planning a trip around a festival, be sure to book your accommodations in advance, as these tend to be very busy times in the city.

One of Ireland’s major tourist attractions is located not far from Cork, and can be an easy day-trip. This attraction is, of course, Blarney Castle and its famous “Blarney Stone,” both of which are in the town of Blarney. It is a charming little town, although extremely touristy, and the historic castle itself gets overshadowed by the stone which lies at its top. Legend holds that those who kiss the stone – while being suspended upside-down, no less – will be granted the gift of eloquence. (The Blarney Stone is alternately called the Stone of Eloquence.) Yes, the whole thing is a gimmick, but if you feel like you have to kiss the Blarney Stone then who are we to judge?