The Shack Restaurant in Kinsale

Yayyy! They have chairs for babies!! 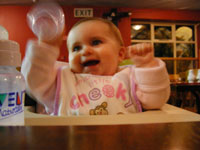 After a couple of awkward experiences in Cork dining with the munchkin, we decided to hedge our bets and seek out a place that was distinctly child-friendly.

We had heard that a local restaurant called “The Shack” was family owned and so we surmised they probably would have facilities for children. The interior of The Shack Restaurant was quirky, with crudely carved wooden walls and doors and even two outdoor electrical poles with wires strung across from each other near the entrance. The high-backed enclosed bench we were sat at was a bit small for two adults on one side of the table, but the other side (and most of the other tables) were equipped with regular chairs. We could have moved, but seeing as I was the one being squeezed next to the wifey I didn’t mind too much. To our relief, they had a child seat and the munchkin was happily situated for devouring whatever bits of food got within her reach.

The dishes were all around the €13 range and filling. 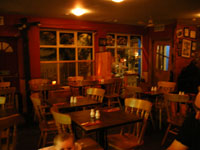 The wifey found good and bad with her tiger prawn and tomato pasta. The prawns themselves were excellent, but the sauce had, in her words, “that store-bought taste,” as if someone had added sugar to the sauce and the vegetables seemd overly soft, as if they’d been canned in the tomato sauce. The overall dish wasn’t bad, but it didn’t taste home-cooked. The seafood pasta seemed to be the same sort of dish with mixed seafood (but no prawns, much to the father-in-law’s dismay after trying one from wifey’s plate).

The fish dish we ordered was excellent and the portion healthy enough that we all stole a delicious bite.

My burger was pretty freakin big and I was delighted to discover that the BBQ sauce actually had a modicum of spicy heat in it (rare in Ireland), enough so that I didn’t mind that it was also a bit sweet. It came equipped with a sizaable patty and a nice fat rasher; very filling.