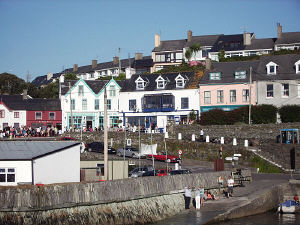 I’m going to say the words “Baltimore” and “Ireland” in the same sentence, and it’s not going to be because I’m confused. Yes, there’s a Baltimore in Ireland. It’s a small village on the southwest coast of the country in County Cork, and it’s a charming place to visit. Just remember, whatever you do, don’t pronounce it the same way you would pronounce the city in Maryland – the Irish version has a long-A sound at the front. This ain’t no ball-timore.

Baltimore, Ireland is a pretty harbor town which still has a busy working port at its heart. This isn’t a traditional tourist stop, and there really isn’t much to see, but this part of Ireland is well-known as being the place to be when you find yourself in the middle of that rarity called an Irish sunny day. Many of the town’s pubs and restaurants overlook the harbor, and if the weather’s nice you may think you’re seeing half the town’s population sitting out front enjoying a pint of something while they soak up the sun. 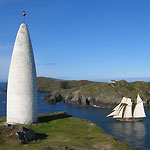 In terms of “sights,” Baltimore – as mentioned – isn’t exactly tourist central. But the town is home to a lovely restored castle which visitors can tour, and it offers a nice view of the town itself as well. Another point of interest, although not really a tourist attraction, is the stone called the Baltimore Beacon – it’s the large marker which indicates the entrance to Baltimore Harbor, and it’s known locally as Lot’s Wife.

But in terms of reasons why you’d visit Baltimore, there are mainly two. One is that this is an excellent spot to really kick back and relax, especially in nice weather, in a typical Irish coastal town. The other is that Baltimore serves as a good base from which to visit the nearby Sherkin Island and Cape Clear Island, both of which are popular with people who are into sailing, fishing, and even diving.

Should you be visiting Baltimore in May, you may be treated to the town’s annual Fiddle Fair or the Seafood Festival.