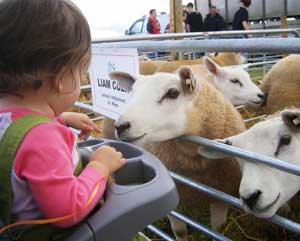 This Sunday I got up early and after we’d attended mass and fed the munchkin, jumped in the aul wagon and headed out to the annual Athlone Agri Show held on the grounds near Moydrum Castle of U2’s Unforgettable Fire fame.

It was my first time at the festival, which is not well-advertised to the tourist market. Certainly I believe I may have been the only yankee voyeur in attendance.

The festival is targeted primarily at the farmer and equestrian enthusiast and the Moydrum grounds were teeming with prize sheep, goats, ducks, chickens, dogs, cattle and horses all hoping for a blue ribbon. Families were about in profusion and sturdy boots and wellies (galoshes) were the footwear of choice. 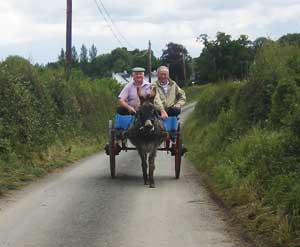 Right away I could see that I’d made a good choice for our day’s activity as the munchkin pointed at every animal that came into view, exclaming excitedly and giggling if we managed to get closer.

There was definitely a predominant air of professional interest with most folks busy unloading their animals into pens or looking after their horse’s performance, though a number of snack and amusement tents were present as well. I only stayed until noon and got the impression that the festival picks up later with sheep dog trials, entertainment and the like. Our morning visit was entertaining enough for the munchkin, but as I have no vested interest in show ponies, horse jumping or livestock in general my interest began to wane as lunchtime approached.

I did manage to purchase some surprisingly good sheep’s cheese that tasted like a mild cream cheese, but smoother. 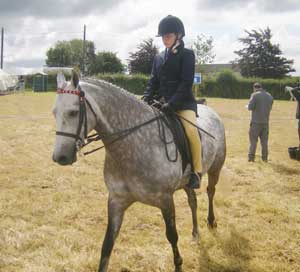 I should also mention that the Athlone Agricultural Show seems to have a national draw, as the accents of folks around me betrayed. There seemed to be representatives from all over Ireland: the north, Cork, Kerry and Mayo from what I could tell. Certainly a good thing to attend for anyone interested in rural Ireland and the lifestyle surrounding it. The grounds were not too muddy, despite recent rains, and the festival was relaxed and seemed well organised. Fair play to the Moydrum folks for a great day out.