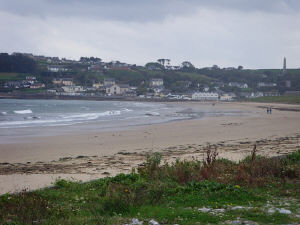 It’s the time of year when every travel outlet and their brother is coming out with lists about what the hot destinations are going to be for next year. And wouldn’t you know it, the location coming in at #4 on TripAdvisor’s list of destinations for 2009 that are up-and-coming is Ardmore in County Waterford. So I thought we’d take a look at Ardmore here, to see what makes it special enough to have gotten the attention of TripAdvisor.

Ardmore (sometimes written as Ard Mor) is, as mentioned, in County Waterford and it’s situated along the Irish coast. The town is traditionally a fishing village, and the official population is well under 400 people. But don’t let this village’s small size and work-a-day reputation fool you – those 300-some residents make room for lots of tourists during the high season, and there are actually a few B&Bs and hotels in Ardmore you can stay in when you visit. 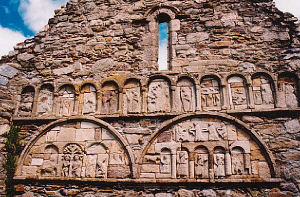 What makes this little town with only a few hotels worth visiting? It’s a history buff’s dream – little Ardmore is widely held to be the oldest Christian settlement in all of Ireland, boasting that Saint Declan lived in and brought Christianity to the area before Saint Patrick came around. The ruins of Saint Declan’s church and oratory, which date from the 13th and 18th centuries respectively, can both be visited just outside the town center. And if you think the 13th century church is old, check out one of the outer walls and its 9th century carvings. This wall was once part of another earlier building and was incorporated into the church when it was built. You can make out carvings of Adam and Eve in the Garden of Eden, among other things.

Additionally, this coastal community has a beach that’s a mile long and a few other beaches besides. Ardmore is a popular beach destination in Ireland for these beaches, which are great places to spend time in good weather. The main beach in town (the one that’s a mile long) was the first in Ireland to be given the Blue Flag listing for environmental cleanliness. Not only that, the whole village has been named “Ireland’s Tidiest Village” in the past. Personally, I just love that there’s an award for “Ireland’s Tidiest Village.”

Really, for a sparsely populated town that can still kind of accurately be called a “fishing village,” there are lots of things to keep the intrepid visitor busy and entertained. And although many of them – including the aforementioned beaches and a popular cliff hike – involve being outdoors and are therefore best planned for nice weather, if you happen to be visiting Ardmore during foul weather (y’know, in the off-season when you can get cheap airline tickets) there are a few Irish pubs in town where you can enjoy a pint or two and make some new friends as well.

For more information, see the Dungarvan and West Waterford website entry on Ardmore