Fly for less to the Irish midlands! 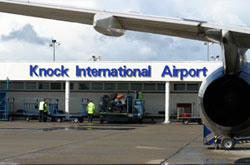 If you have ever flown into Ireland, you know what a nightmare it can be to pass through Dublin airport.

Well, back in the 1980s a small midland airport was mysteriously developed to accommodate international flights to Ireland (if you ask Christy Moore, it was for bombers to refuel before flights over communist Russia). The airport has languished from a lack of viable destinations until recently.

Just yesterday Globespan, a low cost airline, has announced the first transatlantic flights from Knock airport starting in May 2007.

This means that you can bypass the big smoke altogether and land directly in the welcoming bosom of the Irish midlands. Flyglobespan will operate three services a week from Knock Airport to New York’s JFK and Boston’s Logan airport. The press release states that they hope the transatlantic flights to bring up to 35,000 US tourists and an estimated €28 million in tourist euros to the region in 2007. This is expected to grow to over 56,000 US tourists with an estimated spending power of up to €45 million in 2008.

The Minister for Community, Rural and Gaeltacht affairs, Mr Éamon Ó Cuív stated that “21 years ago, many people laughed at the idea of building an airport in rural west Ireland because it went against the accepted theory of providing services in urban areas with higher populations….However, Ireland West Airport Knock is a classic illustration of an alternative theory…that if we provide services in rural areas, they become more attractive to live in, populations levels rise, demand for services grow, and the pressures on our urban centres stabilise.”

Keep in mind that Knock is a religious destination for Catholic pilgrims worldwide. Monsignor Joseph Quinn had this to say, “This realises a key part of the original vision for the Airport which was to serve pilgrims worldwide. This announcment has huge potential to attract more pilgrims from the United States to Knock Shrine and to the many religious and Christian heritage sites throughout the west of Ireland.”

Flights to New York will commence on the 27th of May, with two weekly services to Boston Logan International Airport, commencing will begin on the 30th of May 2007. Seats will cost will range from €139 upwards.

Of course, for the best selection of cheap airfares, you should definately check out bootsnall’s cheap flights! Yayy!