A rose by any other nationality 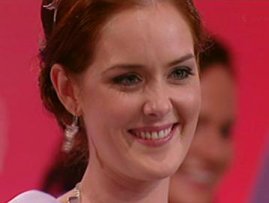 Lisa Murtagh of New York has been named this year’s Rose of Tralee.

The festival, now in its 48th year, has been held annually since the 1950’s. What used to be a contest for a carnival queen born in Tralee was extended to County Kerry and then in the 1960s to embrace anyone of Irish descent anywhere in the world.

This year’s rose is a 27-year-old lawyer from New York and won the contest crown from 30 other finalists from all around the globe.

The festival gets its name from a song (called, you guessed it, “The Rose of Tralee”) written in the 1800s by Irish emmigrant William Mulchinock. He was inspired to pen the song when he returned to Ireland after years in the states to find the object of his unrealised love, the family maid, had died of tuberculosis. Regretting their love had been denied due to social status and time, he wrote the song as a lament.

The current festival is far from a somber affair, MC’d by popular radio personality Ray D’Arcy for the last few years it’s a bit of television event here in Ireland.