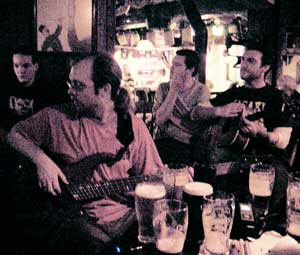 It was an usual session this week. For starters, wifey volunteered to join me on the evening. Secondly, a number of her co-workers joined us as well, including bawn, a very able performer.

A number of the usual crew were in attendance, including ze germanz and the sheriff. Jbanjo and a bodhran player I’d never seen before (who seemed a bit surprised at the complete lack of trad at the session) completed a fairly large turnout around the aul table.

One of the memorable tunes of the evening was this Massive Attack song bawn pulled out with a little help from wifey on vocals. Maybe some of you will recognise it as the current theme to House MD.

Bawn played a number of catchy, Seattle-tinged rock songs. I had great craic playing the bodhran over them – I really love it when a modern tunes requires the digging of a funky rhythm out of the aul goatskin. Know what I mean?

I really wanted to stick up one of jBanjos tunes from the evening, but the recordings were just too quiet. I’ll have to go shove the little yoke under his chin next time *grin*