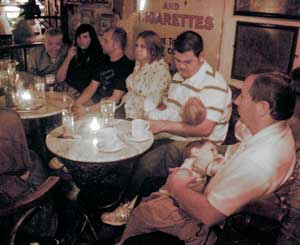 It was an unusual Shack session this week.

It all started some time after nine when ze germanz rang to see was anyone coming out to the Shack. A few minutes later it was he and I settling in on our lonesome, discussing the rainy weather with the proprietor and speculating about the chances of more attendees. I knew that Nelbert’s wedding was Thursday and her Texan fiancee, creamy cookie, was in town with his family. I surmised they might find their way out sooner or later.

Within an hour, the fingerpicker and des had arrived with the sheriff and bongos not far behind. Then creamy cookie and company came through the door en mass, filling up all available seats around where we were sitting. What had been a quiet night at the Shack became a huge family event and all the better for it.

It was a lively night and after some gentle persuading (okay, so the whole crowd began chanting his name), creamy cookie’s brother-in-law put down the baby and took up the guitar to give us a couple of tasty southern-fried tunes, my favourite of which has to be this: the perfect country and western song.