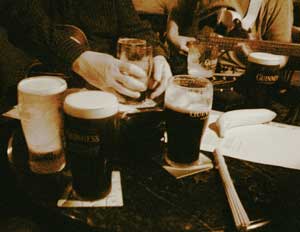 I was feckin exhausted this Tuesday. Seriously. I was yawning through the visit with wifey in the hospital and was ready to keel over once I got in the house. Lil sis kipped out on the couch and all I could think was . . . it’s Tuesday. After the week I’d had, I felt so removed from it all – like the gathering at the Shack was happening in some other town in some other place far from me.

I couldn’t shake the feeling that somehow if I went to the Shack then everything else would return to normal too.

Ze germanz graciously offered me a lift and we arrived to find the place empty. I still felt out of sorts, like I wasn’t really there or that the Shack was an alternate version of itself. Within a few minutes the doors swung open to admit hardy, the sherrif and the fingerpicker. Everyone seemed to be in good form and all the jolts of the past week shook themselves out as I dove headlong into the music.

At one point I rang wifey and the whole table seranaded her over the phone placed in the middle of the table.

There’s nothing like music for a troubled mind, folks. I think that’s the sentiment behind this tune that hardy pulled out.