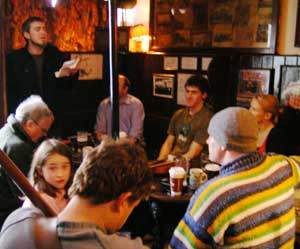 It’s a thing that is fast disappearing – the recitation. Sure, there are plenty of tunes and songs in the pubs of Ireland still, but rarely anymore do you get the brave punter standing to recite a poem, clever joke or bit of prose. It’s this kind of a thing I present to you this week, faithful readers, courtesy of our good man hardy this Sunday past in Sean’s Bar, Athlone.

Standing, his strong voice enunciated this valediction on abstinence. As he says in his introduction, a lot of people are giving up the alchohol for the 40 days and 40 nights of Lent and as this older poem he reads demonstrates – that’s no new thing here in Ireland. They say Ireland has one of the highest percentages of teetotalers in the world, though her reputation may be for the opposite sort of behavior. Just as surely as things could drive a body to drink, isn’t it drink that can drive a body to abstain? The cycle repeats itself . . .