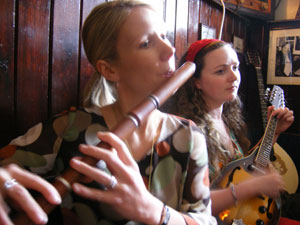 Sean’s Bar, being an exceptional place itself, sometimes makes the exceptional things that happen within its walls seem less miraculous by context.

This past Sunday session started small, but grew to a decent size before it was over. The exceptional event I’m referring to occurred after a couple of young fellas (below there on the right) joined the circle, demonstrating some apt and articulate musicianship. Then the lads started up a tune and the very able senior players in the circle – one by one – lowered their instruments to listen. This isn’t too odd – it occasionally happens when a player produces a tune the group isn’t familiar enough with to join in on. As it finished, someone asked the young fellas,

“What was that one there?”

They looked at each other slightly abashed. Then the older one spoke up, nodding at his younger brother on the whistle,

“He wrote that one.”

Now when I first arrived in Ireland I asked about “new” Irish traditional music and was met with mostly blank looks. I was sometimes treated to incredible pieces by bands like Lunasa and Dervish, but when I asked if they’d written the tunes I was told that they had merely re-arranged them. These young lads, dextrous players each, are naturally producing new tunes.

I can’t tell you how great I think this is – it bodes extremely well for the future of Irish trad if young lads like this are so comfortable with the genre that they’re producing new material. Now, of course, I did not have the recorder running at that moment. But here’s another sample of the gossens playing.