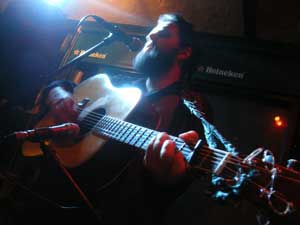 You’ll remember my recent post on Robert Blake’s Bog Lane show, but Mr Blake is 2/3 of the way through his Irish tour at this point and conducted a very well-received show at the Shack Pub in Athlone this past Saturday.

I managed to get some video of the concert’s beginnings, but forgot an extra tape, so ran out before Mr Blake got deep into his set. I did, however, manage to capture some fine performances by opening acts My Fallen Empire, Fergal Cox and, my humble self played a few songs as half of Kerbside. I’ll see if I can get a chance to edit something out of it and post it here later this week as a video blog.

Mr Blake, for his part, seemed glad to be back in Athlone and delivered a fantastic set to a packed room. One of the best things about Robert’s performances is the way this consummate showman weaves anecdotes and monologues seamlessly into his performances. The show this Saturday was rife with them, but by far my favourite was this rap about the craic in San Francisco. Now, it’s not just because I’m a San Franciscan; this was truly inspired.

Apologies for the quality of that mp3 there, I had to compress the bejaysus out of it to make it small enough to post here, but I think it’s still listenable. Let me know if it’s not and I’ll personally email you the hi-fi version – it’s that good.

After the show we retired to the obligatory afters and, as several offers of a place to stay evaporated in front of his eyes, I was happy to invite Robert and his friend back to crash at our gaf – warning him about the early morning munchkin, of course, who would inevitably discover his sleeping form on our couch and attempt to stick select members of her toy collection into his nostrils. As it turned out, the munchkin was well-behaved and we had a leisurely breakfast before making a brief appearance at the Sean’s Bar session later in the afternoon.

In any case, it was great to see Robert Blake back in town and even better to be invited to open for him, even if I was on my lonesome. Back when we were touring with Robert after our album release, wifey was heavily pregnant with the munchkin but still able to get onstage and belt out one hell of a song. Not counting the first songwriter night back in 2004, this was my first solo original gig in Athlone. Let’s see, the munchkin is now toddling about the place – I can’t believe it’s been over a year since Robert, myself, Jon and a very pregnant wifey were all cramming into our Ford Estate and flying from gig to gig around Ireland.

How time does fly.