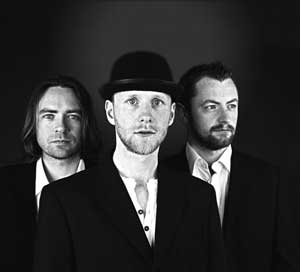 Called the land of saints and scholars, Ireland also has cradled a huge number of poets and songsmiths in her emerald arms. Even today, Ireland produces ridiculously disproportionate number of internationally famous musicians and bands given its diminutive size. What is it about this small, rain-soaked island that breeds such excellent music?

This is the sixth in a series of profiles I’m doing on noteable Irish musical artists and groups. It’s my intent to shed more light on what makes Ireland such a great place to be for anyone interested in music.

This week’s artist is Guggenheim Grotto.

Guggenheim Grotto is Kevin May, Mick Lynch and Shane Power. The Dublin-based trio is a very new one, but has been making huge musical ripples with their gentle, carefully produced songs. The band has recorded very little, spending a lot of time at their live shows where they showcase a lot of as-yet-unrecorded music. Kevin and Mick released the first Guggenheim Grotto EP, A Lifetime in Heat in 2004. They signed with a record label and released their first full-length album, Waltzing Alone in September 2006.

They were featured at the last SXSW convention and I heard from a friend in Australia last year that he heard a track from A Lifetime in Heat playing in a supermarket down there. For such a new band with very little material in the public forum, they have captivated a huge following of listeners and fans around the world very rapidly. The lads are all multi-instrumentalists and their harmonies remind one of young Simon and Garfunkel arrangements. Rich, layered vocals and close-mic’ed instruments lend their music an intimate, confidential feel.

Definately one to watch: the Guggenheim Grotto.