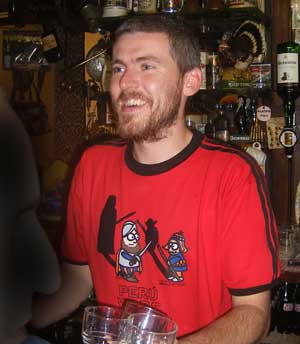 Once in a while you come across a person who seems so intrinsically a part of someplace that you almost can’t imagine it without them. Indeed, without them things just wouldn’t be the same; the place wouldn’t be the same. Athlone had one of these people and he left for France to continue his life less ordinary away from Ireland’s shores this week: hardy.

Hardy was a sometime barman at Flannery’s and was to be seen around Athlone just about every and anywhere music was played. An unassuming and almost shy musician at times, his battered notebook could be produced unexpectedly and, standing proud and enunciating clearly, he had the power to silence a pub with some delicious morsel of a forgotten poem or humorous song. He also had the ability to know exactly when to produce some rousing old song at the lull in a session to get things roiling again.

You never knew whether it was a guitar, mandolin, bodhran, harmonica or just his notebook, but hardy was always a welcome addition to modern and traditional sessions around Athlone town. There were a few nights when I would find myself sitting alone at some would-be session debating whether to give it up when who would come smiling around the corner, mandolin jauntily slung over a shoulder, but hardy. If a session needed a lift, he would provide it. If a session had the integrity to support an injection of something more somber or sad, hardy could provide just the thing to bring a sweet lump to one’s throat.

His going away party was a raucous, joyful affair at Flannery’s pub attended by a scandalous crowd of merry-makers who laughed and sang well into the night. Here’s an mp3 of the electrician and big M singing some powerful old Irish stuff with the bodhran.

The craic around Athlone town just won’t be the same without hardy around.

For a country with a tradition of hemorrhaging her best and brightest, I suppose this is my first taste of bittersweet Ireland and it’s de rigur that two of Athlone’s favoured children celebrated their departure this week; Nelbert and Hardy. Nelbert in her nuptials to a Texan and Hardy for the green fields of his beloved’s France.

Ye will be missed.