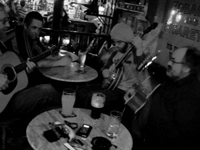 Well, last night was the Shack session. Oh, the pints and tunes and mayhem.

We’ve been running the “modern” session out in the Shack on tuesdays for the last year when it moved from Sundays, where it had been ongoing for at least a year before that. I sensed that the evening was going to be one of the last where I could walk across town without being caught,* so I strapped the bodhrán and guitar across my shoulders and headed off.

It’s gas how the light was lasting until 10pm just a couple of weeks ago and now it seems to slip away noticeably earlier with each day that passes. Strolling across town I met the owner of the local net cafe who seemed headed in the same direction. He told me that he would only go out on a Tuesday or the occasional Sunday night, which I commended to him as good days for a night out. He agreed and added that he’d been meeting friends for a pint at The Shack every tuesday for the last 20-30 years.

I arrived at the bar to find a sparse attendance watching a Liverpool match and, happily, some good friends gathered up at the table where we usually meet. Having arrived earlier than the other musicians, I sat amongst my friends and met another transplanted yankee living in Athlone. A Bostonian this time, she brings the number of local yanks I’m aware of to 6.

Within the hour, the match ended and the other players arrived. I hadn’t spoken to anyone in advance this week, so I wasn’t sure who would show. In attendance was yours truly, Bean (guitar & banjo), Bill (guitar) and Des (guitar). The pints were off the table this week – Bean and I had both got a bad dose at a show on Saturday and hadn’t touched a drop since. Ginger ale for the ginger stomachs!

Des surprised us all with some lovely pieces this week (here’s one) and the quote of the week goes to the Sheriff, who came up with this one-liner after a scruffy old blues number hit the table: Quote of the Week.