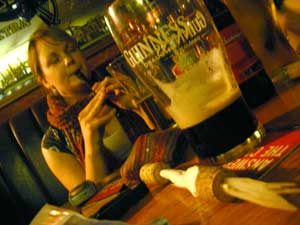 I’ll tell ya, last week will go down in history as a great week of sessions. There was a session every night of last week, with me skipping out only on the Saturday evening. Well, tomorrow wifey and the munchkin return so my days as a session superhero will have to come to an end . . . thank God! I’m really not sure the universe was ready for that much concentrated, musical potency. Climate change is scary enough without Athlone’s musical gravitation throwing the planet out of orbit.

Anyway, it was an unusual Friday session in Flannery’s that I came to tell you about. Friday nights it’s not easy to find live sit-ins, so I was delighted when Hardy suggested the gathering of a few heads down in Flannery’s. It was a quiet night with the musicians matching the numbers at the bar. Meez, milo and big M were among those at the table.

It was night for unusual bits of music. Hardy gave us a rendition of “weela walia.” Would you believe it was my first time hearing someone sing that live? I still remember the 2002 World Cup commercial with your one from Father Ted raving on about how “don’t we all just LOVE the football” where she mentions “singing all 27 verses of “weela walia.” Gas. Along the lines of disturbing tunes, big M gave us this one which, he claims got him ejected from the self-same bar some years earlier. And no wonder! “Get out!” came the roars from the bar as he finished. Fair play to him.