5 Finger Discount at the Stables in Mullingar 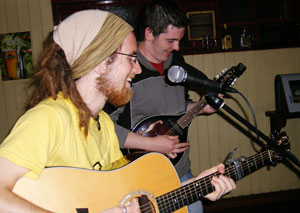 So, last night the bean and I in our capacity as Five Finger Discount packed up the wagon and headed out to The Stables in Mullingar to play an evening of music.

It was a bit of a thrown-together affair and the bean and I were debating on the trip up whether we should split the evening between our original material or just jam a few cover tunes. As it turned out, we did a bit of both.

The highlight of the evening had to be when John Banjo got up out of the crowd and picked up my not-so-great mandolin and made it sound like a million bucks. I mentioned this player back some months ago at The Green Olive Session when he was playing his instrument of choice. Nevertheless, my crappy mandolin presented no challenge to him last night.

Seriously, I’ve seen some damn good mandolin players around the Irish midlands and I got my socks blown off when I saw Nickel Creek play last year at the Cambridge Folk Festival – I had no idea your man was such a virtuoso on the mandolin – but John Banjo seriously gives anyone I’ve ever seen pick up a mandolin a run for their money.

The thing is, John Banjo wasn’t out to play music on the night, he had been out for the night with his friends and had to be persuaded to get up and give us a tune or two. Even after a few jars he was still able to move them fingers: have a listen to this track, the second he played on the night. Wow.