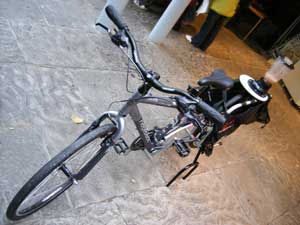 I know what you’re thinking.

Yes, my apt friend, it is. That is the bike that the Irish week of wonder crew have been dragging around the country, amazing small children and filling them up with nutritious fruit goodness.

Yes, that’s actually a blender that, through a bizarre feat of engineering, makes smoothies when someone pedals the bike. When you read all about it on the eco travel logue and Travel Gear Blog you can say you saw it here first!

But that’s not all! I saw a bizarre contraption atop a huge lorry sitting under Athlone Castle. The sign says “simulator” and, having watched Woody Allen’s “Sleeper” oh, a couple decades ago, I was curious.

Me and the walls decided we had to give it a go. Despite appearances, it wasn’t a flight or NASCAR simulator, but a roller coaster. 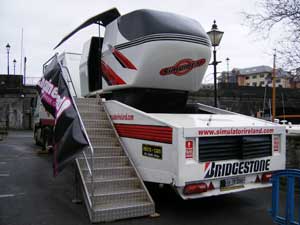 What actually happens is you climb into that little box up there, the hydrolic door descends and a British voice advises you of the presence of hand rails and a stop button on the ceiling. Then, a bad-quality screen plays a dvd of a computer-generated roller coaster ride around . . . what appears to be an asteroid stuck in orbit around the 1980s. Some hill-billy like skiffle/rock music plays along.

The great thing is that the car you’re sitting in jerks and leans at unexpected intervals, completely out of sync with what’s happening on the screen.

It was awesome. Walls and I were singing the hillbilly song for hours after our turn in the thing.