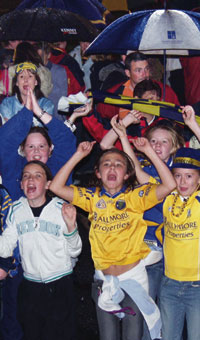 Children, I have something to tell you: Saturday night Roscommon won the minor All-Ireland final in a mighty battle.
The last time it happened was 55 years ago.
Just imagine.
I happened to be privy to the Clann na nGael celebration. There was electricity in the air. In a joy that superceded age, children and adults screamed, applauded and generally exploded with joy. “The famine is over!”
I, unfortunately, did not catch the game itself. It was a replay from last week’s tie with Kerry and, by all accounts, the game was described as outstanding, unbelievable, mighty, fine win, brilliant, fantastic and out of this world.
When the boys arrived, theirs was a hero’s reception. It felt epic, the cheers swelling to what seemed an impossible volume as the Roscommon team slowly approached on the bus with the cup rose high. The team stepped onto the stage to a mighty roar and yellow and primrose blue flags were hefted high.
Any foolhardy enough to think of approaching Roscommon for an average weekend’s carousing was bound to be sorely disappointed. The town was a complete standstill. The streets were overflowing with Roscommon jerseys and ecstatic faces.
Sweet.