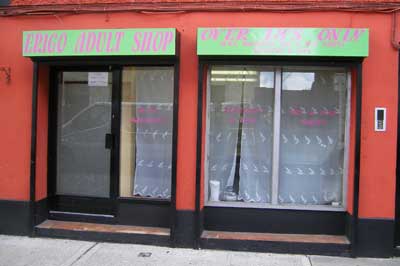 It’s not something the Irish have traditionally been known for. Even today, it’s fairly rare to find an “adult shop” in an Irish town. Off the cuff I’d venture to say Athlone may be the only midlands town with a dedicated “adult” shop.

When the first one opened up a couple of years ago there were protests – signs, pickets and the like. This time the second opening of an adult shop in Athlone – right around the corner from the first, I might add – there wasn’t so much as peep about it.

From what I’ve heard, the new shop isn’t so much of an addition to the old one around the corner, but a replacement. I saw someone going into the old shop just yesterday though, so I really couldn’t say.

Growing up in the bay area where there are loads of these types of places it’s really not such a big deal. Wifey and I had recently been in Amsterdam, where there must be the world’s greatest density of adult shops and were highly amused when the one opened up in Athlone. I was having lunch with a co-worker around that time and she and I were discussing it.

“I wonder what it’s like?” she asked.
“I’d imagine it’s pretty weak,” I replied, visions of the shocking storefront displays in Amsterdam still fresh in my memory. “Why don’t you go check it out and see for yourself?” She looked at me.
“You want to?”
“What, now?” I said.
“Sure, why not?” she grinned at me.
“Oh, I’m sure THAT won’t go noticed in this town” I laughed, “I can just hear them, ‘Didja see yer man, that American fella going in the sex shop? Sure he wasn’t alone, either! Your ONE was with him – some girl from Galway – you know what dem Galway girls are like – “ I fixed her with my best old-lascivious-Irish-man one-eyed scowl – “FILTHY!!”
She burst out laughing. Then she leaned back in her chair, fixing me with a challenging look.
“Afraid, then?”
“Oh, is this some kind of dare or a plan to sully my reputation as a good Catholic husband, is it?”
“Bawk bawk bawk bawk . . .”
“Hey – I’m the crazy hippie from San Francisco – you’re the one whose got something to lose, Miss County Galway.”

Well, after all that we could hardly not go. Plus, we’d be walking right past it on our way back from lunch. I’m sorry to say it was a subdued affair focused mostly on stag and hen nights – learner plates and rude cake toppers. There was a sadly limited selection of novelty condoms and the magazines on display were pretty much the same as Maxim or Nuts on sale across town in Eason’s. Strangely, the small rack of videos appeared to be all VHS tapes – who the heck still has a video cassette player?

What reason is there to frost the shop windows of such a place when the rest of Ireland displays bare breasted women in their magazine racks for every 11-year-old to see? In California you could never display magazines like that unless they were hidden behind cardboard in the rack – and we’re supposed to be the WILD, CRAZY state.

With the internet basically being a huge repository for free pornography, these sex shops must know their audience: stag and hen parties and older men who haven’t even modernized their lives enough to own a DVD player, let alone get internet access.

Woah, there’s a scary cross-section of the population.

Maybe there SHOULD have been protests . . .