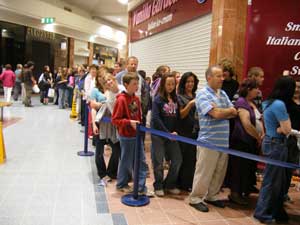 Yes, the rest of the world is doing it and Ireland is no exception. Last night at midnight the local corporate bookshop held a Harry Potter release giving away free t-shirts, books and, most importantly, copies of the final installment of J.K. Rowling’s Harry Potter series at half price.

At 5pm there was a queue forming in front of the book shop in Athlone’s Golden Island shopping centre.

As there was a work do on for myself on the night, we only came down around midnight to see what the craíc was. Well, the place was a-buzz with activity as if people were out for Sunday afternoon shopping. The queue had extended out the front of th shopping centre and tired-looking kids and their parents stood anxiously in line. Newspaper photographers milled about, snapping up the spectacle. Security guards allowed small groups in to purchase their books, pick up their bags and ogle a few costumed stockists who were busy piling more Harry Potter books onto the tables.

Hilariously enough, the supermarket down at the end of the shopping centre was selling the book cheaper (albeit without the goody bag or costumes) and a number of triumphant people strolled past the bookstore queue with their supermarket copies in hand.

Wifey and I got our copy and skee-daddled away from the madness.