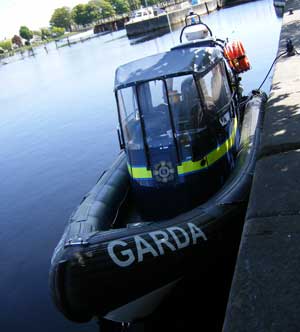 So I was strolling along the Shannon the other day when I came across the high-powered, official watercraft you see there to your left.

Now I have seen the inland waterways boat a few times, but I was completely unaware the that gardai had a . . . what is that thing, a patrol boat? I have never seen any official action on the water either on the lake or down the river, unless it was dredging for a body (no, I’m not kidding) or retrieving someone from an ill-advised swim. This is a different beast altogether.

With twin engines and an inflatable hull, I’d say this baby here could probably outrun just about anything else on the water. The presence of such a craft would insinuate a need to address crime on the river – and not misdemeanors involving mooring or speeding, things which I’d imagine would fall within the inland waterways jurisdiction. It used to be, so I’m told, that there was a floating dance hall on the Shannon that could stay open all night because pub hours only apply to pubs inland. If the gardai were on this boat at night, could they bring closing hours with them and shut down any floating parties? What laws apply on the water, anyway?

Actually, what laws DON’T apply on the water?

What kind of criminal attempts to escape down the Shannon anyway – won’t they simply get stuck at the next set of lock gates? Maybe this is for lake patrol – I suppose there’s plenty of lakeshore providing escape opportunities for watercraft-equipped bank robbers or . . . um . . . shoplifters?