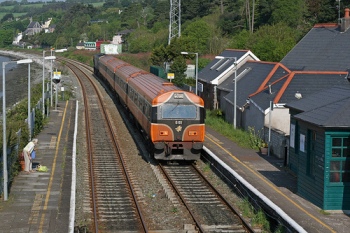 If you want to explore Ireland without the stress of driving a rental car, then choose to travel by train. All trains in Ireland are generally comfortable, reliable and inexpensive. However, current routes pass, almost without exception, via the single hub: Dublin. Heading anywhere and everywhere involves making a stop in Dublin.

Take a look at the rail map of Ireland . Want a good example of having to go via Dublin? Getting Galway to Limerick , until 2008, was done via Dublin. Nowadays, you can get a direct train between the two cities.

Make Dublin your hub, as well. Since all connections start in Dublin, it’s only obvious to plan your journeys starting here. Definitely saves you some headaches.

If you plan to spend several days (or even weeks) traveling by train in Ireland, purchase a rail pass. There are several types of passes, depending on how long you’ll be staying in the country. Of course, if you’ll only be traveling two times by train during the vacation, it’s not worth it to invest in a rail pass.

Do your research in advance. Unfortunately not all major attractions are well served by trains. But if you need to travel between major cities, trains are good options.

Rail stations in Ireland aren’t particularly big. Platforms are often announced 10 minutes before the train departs and can change if the train has been delayed. In large stations, there are electronic listings of the train in the order of departure.

The Enterprise is Ireland’s flagship train, connecting the capital cities of Dublin and Belfast. The journey takes about 2 hours due to the restrictions in speed along the way.

Unfortunately, rail stations don’t serve the airports too well. Only two stations are close to airports: Farranfore is about 1 mile from Kerry Airport (KIR) and Sydenham is right next to Belfast City Airport (BHD) (and there’s a free shuttle bus offering the transfer).

Where to get tickets from

You can buy tickets on the Iarnród Éireann – the national railway company – official website . Train tickets are available as single (one way) and return (round trip).