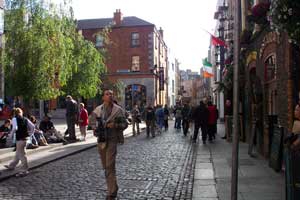 You will probably hear an awful lot about the Temple Bar area in Dublin. This is a neighbourhood on the south side of the river where most of Dublin’s partying happens.

Temple Bar has all the right elements for drunken shenanigans: it’s centrally located, chock full of pubs, restaurants and cultural venues, plus it’s near the campus and has a sizeable courtyard at its heart for sitting and watching the world go by.

It used to be that Temple Bar was a run-down neighbourhood where numerous artists and musicians were able to afford to find a place to stay. Back in the late 1980s/early 1990s Temple Bar was a rough and tumble area filled with buskers and the cultural fringe, a great place to relax among the relaxed. Nowadays its white-hot real estate prices have filled the area with upscale restaurants and posh shops. There is the occasional street performer, but you’ll see a lot of expensive shoes on the passersby – if you know what I mean. 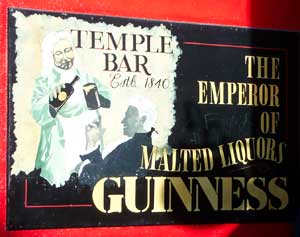 Don’t get me wrong, it’s still definitely someplace you should check out. Tourists, head down to Fitzsimmons Bar where Irish dancers take the stage for the tourists nightly. Beer geeks – DO NOT MISS the porterhouse down at the end of Temple Bar (try the Oyster Stout . . . mmmm). Can’t decide? Have a pint in the bar called “Temple Bar”, just to say you, literally, had a pint in Temple Bar. Or, just sit down and watch the people go by. Check out a street performer during the summer months. Sing with a busker (if there are any). Eat at a nice restaurant (but don’t trust that Alamo restaurant for Tex-Mex . . . bad idea). Eat at a cheap restaurant (like Half Moon . . just cause I designed their logo).