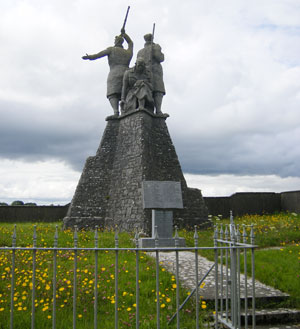 Some time ago I wrote a post on Athlone’s IRA Statue. In my limited experience such a thing is quite rare, certainly at the centre of a major town like Athlone. Well, I was driving north through County Roscommon recently and came across the statue you see there to your left. I simply had to get out a snap a photo.

The difference between this and the Athlone brigade’s statue is not just size (the Roscommon one easily dwarfs its Athlone twin), nor is it location (the Roscommon statue is well outside any major town), but the fact that the Athlonian statue is a revolutionary era statue, specifically commemorating the soldiers who died between 1916-1922.

The Roscommon statue, as you can see from the plaque there, makes no mention of any date. The statement carved at the bottom very clearly asserts that the cause of Irish freedom is ongoing.

Ironically, the inscription, which reads, They gave their lives for the 32-county republic, which has yet to be attained.” seems at odds with itself. 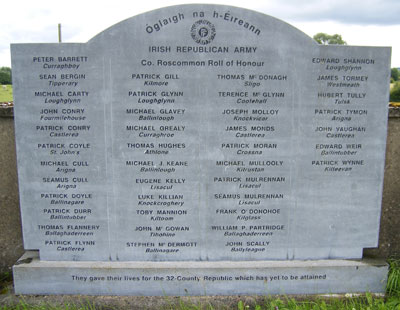 To carve in stone that it “has yet to be attained” would seem to indicate that the carver feels it will never be attained – at least so long as the stone and carving remain standing.

I stood for a while contemplating this perpetual statement of incompletion. Finally, I decided that the quote was chosen as a reflection of the dead soldiers’ sentiments; one meant to inspire one to sympathise with their cause rather than a sorrowful statement reflecting only loss – both in their lives and in hope for their cause.

Still, I think a date next to the quote would do worlds in clarifying its intent – showing that it was meant to be true only at of the time of carving, not forever.

To find the statue, take the road out of Roscommon town toward Elphin.