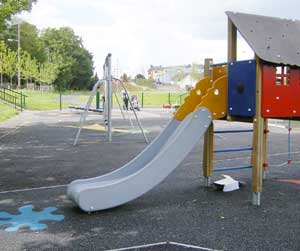 As many a town centre parent will tell you, there’s not much for young children in the middle of Athlone.

Admittedly, there is a playground at Burgess Park on the southeast bank of the Shannon, but it consists of two slides and some monkey bars – pretty weak. To allow one’s child to swing, one would have to head out to the regional sports centre, which hardly anyone walks to as it’s nowhere near the main thoroughfare.

No longer! A new playground WITH SWINGS has just been finished on the Connaught side of town.

It’s an impressive affair (for Athlone), running along a length of what used to be the access canal around Athlone (you can still see the canal behind a fence to the south of the playground – pictured below). By impressive, I mean it has a sizeable climbing structure of rope, a basketball court (well, half of one) and a children’s playground with baby and regular swings – yayyyy!

The area is located in the middle of a residential area (good thinking, that) and directly across from the entrance to the Shamrock Lodge, making it accessible for visiting families as well. The slide is durable, forgiving plastic (as opposed to head-cracking metal, as the ones in Burgess Park are) as is most of the equipment. The area around it is shady and there is a gate and fence to keep little kids within the play area.

The only bad part of the playground is that there seems to be a certain teenage element that has already managed to write some rude things on the equipment. There is also a surprising amount of rubbish in the canal area south of the playground.