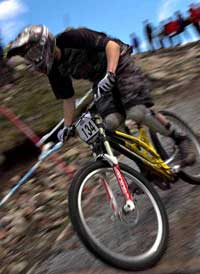 Well, next week the long-awaited Ballyhoura site opens the first of three trails. This first trail is 16km of single-track, gentle climb stuff “not too technical” I was told over the phone. At the moment the trail is all but ready, it’s being signposted (with temporary signage) and will open as soon as that’s done.

By December the other two bits of trail will open with an additional 8-9km of very mixed terrain riding – this would be the hard-core stuff.