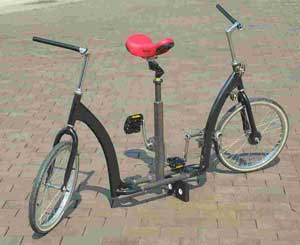 We were talking on Sunday about mountain biking in Ireland, but here’s something completely different.

This madcap Dublin inventor is the kind of guy who, instead of approaching things head on, likes to hit them sideways. Literally. May I introduce you to the Irish sideways bike.

The brainchild of Irish inventor Michael Killian, the sideways bike is described on his website as “Not your father’s bicycle.” He talks on his site about the human sense of balance and how the inner ear’s ability to judge “front to back” balance as opposed to “left to right” is more independent from one’s vision, making feats of front-back balance far more intuitive, even “artistic.” Basically, it’s more fun to lean backwards and forwards than it is to lean side-to-side – this is why swings, snowboards and windsurfing are so much fun. His sideways bike uses the same principle and he thinks the resultant “gliding” motion is loads of fun.

His machine has a slogan as well: “the bicycle has been around for 200 years, isn’t it time for a change?”

A downhill racer it may not be, but you gotta admit, it looks like a bit of craíc.