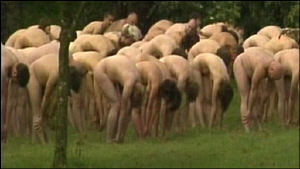 American photographer Spencer Tunick has a thing for nudity, but it’s not what you’re thinking. He has a history of gathering large numbers of naked people in various parts of the world and photographing them en masse – not in provocative or alluring poses, but just in simple and synchronized positions. This time, he’s brought his art to Ireland, and more than 1,000 people turned out to pose naked at Blarney Castle.

There’s a video of the event from the BBC (it’s tame, don’t worry), and I have to say – these people showed up pre-dawn wearing coats and hats, so I can’t imagine that it was at all warm enough to strip off down to one’s birthday suit and then lie on the cold, wet grass outside the Blarney Castle. Obviously these folks are way more dedicated to Tunick’s vision of art than I would be.

The Blarney Castle naked photo-shoot took place on June 17, and Tunick is about to shoot another Ireland installation – this one’s in Dublin on Saturday, June 21. Registration for the event is closed already, but I’d imagine if you’re in Dublin this weekend you just might get an eyeful.