So, when we first arrived in Ireland we got everyone’s best George Bush/texan impersonation. Usually something along the lines of a VERY bad “Oh miiiie gaaahhhhd, yir frum UH-mare’kuh?” 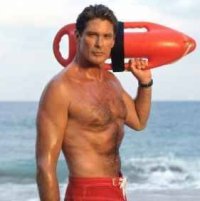 We laughed. It wasn’t meant in a derragatory way and it was genuinely funny. Besides, Irish actors have been doing dead-on American accents for years (we won’t even get into the litany of bad Irish accents by US actors), it’s a relief to see not all Irish people can do it.

As we settled into life here, we were faced with a different kind of stereotype: that of the Californian. Most Irish people have visited New York, Boston or Florida. After all, the US is a big place. Flying six hours to get to New York is enough. Another four hours in a plane to get to the west coast? No thanks! Therefore, while the Irish have a reasonably accurate idea of what the east coast is like, their ideas of the west coast come mostly from Baywatch.

We find ourselves all prepared to explain that the distance between San Diego and San Francisco is similar to that from Cork to Paris. “San Diego and LA are year-round sunshine, beaches, Hollywood and bad heavy metal music. San Francisco and northern California is fog, redwood trees, vineyards, silicon valley and jazz music.”

At least, that’s what we’d like to say. Unfortunately, the second “San Francisco” comes out of our mouths stout Irish famers look nervous and edge away. Irish women look skeptically at our not-so-fashionable attire. Younger, more uncouth types say, “Isn’t that where all the hippies and the gays are?” 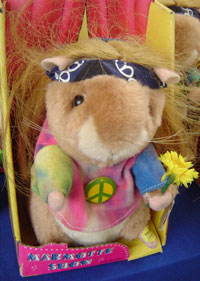 So imagine my distress the other day when I was in town and encountered the object to the left there. That’s right: a hamster in absurd 1960’s garb looking about as earth-crunchy and absurd as possible. A tiny characterature ridiculing an entire decade. Satirizing what was, for many, a noble attempt to change the world.

I couldn’t help it. I saw that little tag down on its foot that read, “Press here to hear me sing.”

I knew what was coming.

The paw sewn to the little daisy began to wave. The little head nodded as if in a doped stupor. In the tiniest, most shrill and ridiculous voice possible, the thing began to croon: Eeeeeeef yeeeer go-eeeeen to Saaaaan Fraaaaan Seeeeeskoh . . .”