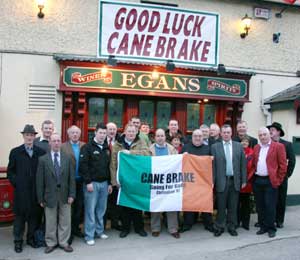 So there I was, innocently minding my own beeswax at work when the deputy editor stuck his head in and asked if we wanted to go watch “the race.”

I must proclaim my ignorance at this point. Not only did I have no idea whether he was referring to Formula 1, dogs, rabbits, slugs or a 3 legged sack race, I had no idea where this “Cheltenham” place was. I assumed with the name that it was somewhere in England (also by the fact that it was pronounced “Chil-tehn-HIM”).

As it turns out, Cheltenham is a race track for horses somewhere in England. A local horse named Cane Brake from Moate was competing in the race and stood to win €60,000 or so should he cross the finish line first. Being good local people, we trooped next door into the pub to witness the frenzy. And a frenzy it was. Across the road, people were standing about in front of a bookies. For that matter, people were standing IN the road.

As we pushed the door of our pub open we realised it wouldn’t open entirely due to the crush of people inside. The editor slipped expertly through the crowd. I pushed past a man in a bright green and blue silk jockey outfit holding the reigns to . . . a giant fuzzy yellow duck. 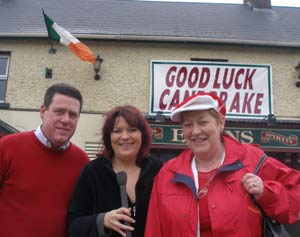 Aside from Cane Brake, there were several other unlikely-named horses. One called Beef or Salmon, I think one called Bibbity Bobbitty Bobbitty (I think I got that right) . . . this really was a completely different to anything I’d ever experienced before.

“Horse racing is huge in Ireland,” one of the production staff leaned over to tell me.

We settled amongst the restless fans and watched a big screen depicting a bunch of horses that ran around a track for 3 miles over some hurdles. It took about 5 minutes. Near the end, various members of the assembly began shouting encouragement at the screen. I have to say, it was one of the more bizarre experiences I’ve had here. Cane Break did not win, but the winning horse was an Irish jockey, so the throng of spectators seemed satisfied with the outcome.