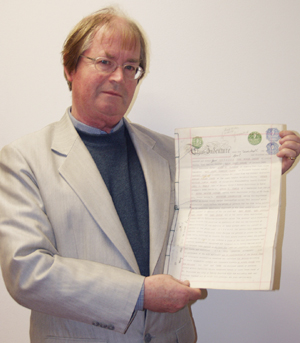 Noel O’Gara sells stone in Athlone. Last year he noticed that a lease on a forgotten park in Dublin had expired and that it was quietly added to a list of items for public auction. The absentee British landlord was mis-advised as to the value of the land and let it go to the auction block at its original value. Noel slipped in there and bought, for less than €10,000, a prime piece of open land in the middle of Dublin city.

The land’s actual value is close to €200 million.

Following the purchase, he drove down to Dublin and padlocked the entrance gates, much to the chagrin of the dog-walking locals who regularly strolled through what they thought was a city-owned park. Needless to say, there was an uproar over the whole thing. Dublin city council issued a CPO (compulsary purchase order), which Noel is fighting in a fantastic and bizarre burst of bogland personality.

Basically Noel is a real local weirdo and it makes for great news. He has published a charming book claiming The Yorkshire Ripper was never caught and is still on the loose. He hates Dublin city council (and, possibly, government in general) describing the council in the news as a “crowd of devious bastards ” and was quoted yesterday in The Athlone voice saying, “I will not let this go and will continue to challenge those faceless bureaucrats. They are all incompetent, I know because if they weren’t they wouldn’t be on the council.” As for the neighbours of the park in Dublin, he says,

“The people in the area have big gardens and properties worth millions yet they expect me to give them another playground. Ya f**king right.”

It would seem Noel is having a field day with this. He recently turned the site into a carpark for €10 a day, then he threatened to turn it into a travellers’ camp, a retreat home for battered wives and the latest in the bizarre list of bound-to-upset-them-Dubs ideas was announced on the Irish Independent website yesterday: Noel has announced that he wants to build a gym, a creche and an underground car park.

The guy might be insane, but it’s all very, very funny to see this midland Irish stone merchant take on big city Dublin beauracracy.

The Post published a story on it yesterday, read it here.