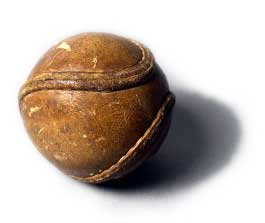 In the world of the strange and bizarre: I’ve just been clued in to an article the illustrious Liam Horan wrote for the Irish Times back in March. Apparently, the officers of a new hurling club in County Mayo released a statement promising that the violence leading to the death of 27 hurlers in a previous match in the area would not be repeated.

Furthermore, 4,000 more people were killed during fighting after that same game.

“We will play the game tough but fair,” a member of the club stated.

In his article, Liam reveals that the “previous game” in question was the first game of hurling ever played. The two sides were the Tuatha deDanann and the Fir Bolg, who, not content with their game of hurling, went on to fight the Battle of Moytura afterwards. The year was 3303 BC.

A local teacher is quoted as saying, “The Fir Bolg weren’t just happy to beat the Tuatha deDannan, but they killed them afterwards as well. And if that wasn’t enough, they chopped their heads off too and brought them back to their king as souvenirs. Accounts from the time say the refereeing was a bit loose. Everything was hit – except the ball.

“Thankfully, the game is much cleaner nowadays. The day after that match, the Tuatha deDanann and the Fir Bolg went into full military battle and over 4,000 people were killed in four days.”

The new Moytura club players were coached to play the ball, not the man, during their club launch.