The Bogman by Walter Macken 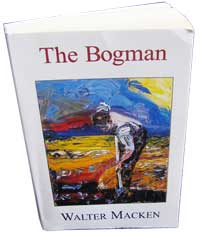 I have to say that the majority of the Irish fiction I’m familiar with come from Ireland’s luminaries – Joyce, Swift and the like. I have decided to make an effort to change that. In a country where the government subsidizes the arts so well and even allows artists and writers a tax-free status on their works, it behooves us to dig in and see what sorts of things are out there.

While a bit dated, I was enticed by the title of The Bogman by Walter Macken. Living here in the midlands, there is an awful lot of life that happens around or having to do with the local bogland.

I have to say this book did not disappoint me. A wonderful snapshot of Irish personality and the lifestyle surrounding subsistence farming in Ireland (I’d say the last generation of such farmers are probably collecting their pensions at this point), the Bogman is lovely, creative and unflinching in its portrayal of Irish passions and the lives that contain them.

Although this book was first published in 1952, the personalities and sensibilities of the village of Caherlo seemed so familiar. The Bogman tells the story of Cahal Kinsella who returns at 16 from a home for boys to a grandfather he never knew in the tiny village of Caherlo. Musically talented but otherwise quiet, Cahal settles into a hard life of farming under the cruel wing of a grandfather who has sent for him to sustain the farm abandoned by his other children. Cahal’s journey is a difficult one where his grandfather’s manipulation eventually plunges him into a life of misery that he only manages to escape through asserting his individuality in the face of everything he knows. His first glimpse of his grandfather is written thus:

His shirt sleeves were rolled, and although the flesh was old the tendons on his arms were strong. They bunched now as he grasped the stick in his right hand. In his left he had the dog held up by the loose fur of the neck. He was holding it high and thumping its ribs with the black stick.

The Bogman is a satisfying, quick read rife with clever turns of phrase and vivid prose. Published in Ireland, you can find The Bogman on Bandon Books’ website