The Biggest Crane in Ireland

Above is a view from the top of the largest crane in Ireland. What is that charming little riverside town, you may ask? Well I’m glad you’ve asked, oh blog reader person – it’s your faithful author’s own Athlone. So how did I come by such a shot?

Yes, the largest crane in the country is currently in Athlone participating in the construction of our new town centre. The centre should be at least partially completed by the end of 2007 and the plans include a 161-room 4-star hotel, 163 residential units, 1151 underground car spaces, covered streets, and a covered public square. I’m sure the presence of this behemoth of commerce poised at the centre of Athlone’s thread-like maze of medieval streets will bring many happy hours to local commuters and visitors from abroad driving for the first time on the left-hand side of the road! 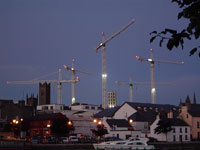 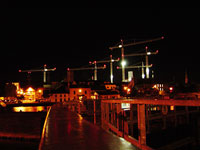 There are currently 8 cranes working simultaneously and around the clock (I’ve seen the big daddy crane swivelling its massive snout at 10pm at night) on the town centre. The two smaller cranes are not visible in these pictures due to the angle I’m shooting from (the town centre project is digging DOWN as well as building UP). No doubt there is a huge windfall in store for the foreman who delivers this project is less than the allotted time.