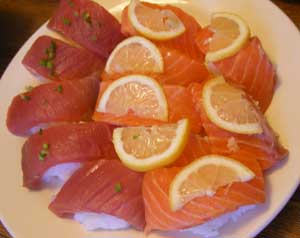 Well, there may be one or two places in Dublin – I recall eating at a sushi boat kind of place with one of those revolving platforms where you pay more or less depending on the colour of the plate upon which the food rests . . . bleagh.

I mean REAL sushi: fresh fish and rice. You know, like gorgeous, buttery fish over that perfect, sticky rice with a bit of wasabi and soy sauce and slivers of shaved ginger in between, like, cheers for the nice ones – I could eat a truckload of the stuff. Well, a new fish shop just opened up in town and I enquired about fish suitable for sushi preparation and was told to return on Wednesday for suitable fish. 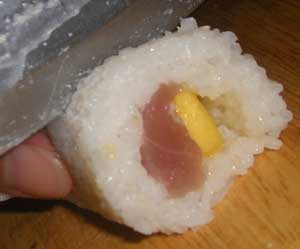 Wifey made the excursion and put on her Japanese chef hat for the occasion. Having secured a source for the fish, the next challenge was to find some suitable rice. We ended up purchasing some short, absorbent grain “paella rice” and some fragrant “Thai rice” which blended together nicely with a couple of other ingredients to produce an excellent sticky sushi rice.

We searched in vain for nigiri (seaweed), but found some miso soup in McSharry’s health food shop. Avacadoes are easy enough to find in today’s Ireland and we had a large bottle of soy sauce still left from an excursion last Autumn to The English Market in Cork some months ago (remember that?). 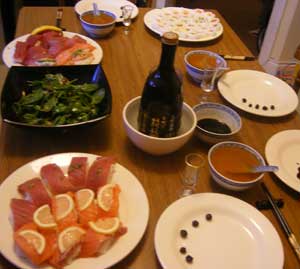 I unearthed a bottle of sake from the liquor cabinet and placed in boiled water to heat for the occasion. The grumpy frenchman, who shares our enthusiasm for sushi, produced a small tube of wasabi – hey! We were ready to go.

The first thing I discovered was that the stir-and-serve powdered miso we had found was disgusting. After initial tastes by wifey and the grumpy frenchman, they concurred: completely inedible. Next for the main course: I opted for sake (the salmon – yes, the same word as the rice wine).

I couldn’t believe the first taste.

I think I actually groaned in pleasure. The grumpy frenchman, who had just returned from Spain and had actually eaten sushi a few days before at a Japanese place in Spain, insisted the fish tonight was tastier. Irish Atlantic Salmon is gorgeous – it might even be superior to the pacific stuff I’ve had back in the San Francisco bay area. The tuna (maguro) was excellent as well. I usually prefer maguro over sake, but tonight it was all about the Irish salmon – I just couldn’t get enough. 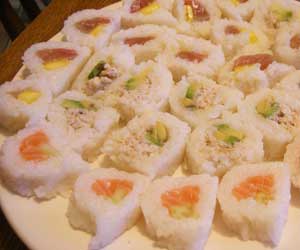 Wifey had also made some inventive little rolls and strange stacked sashimi pieces. The tastiest of these was the avacado/salmon/crab salad one – mmm mmm. The mango tuna roll was surprisingly good as well.

The only things we noted were that it certainly takes some skill to cut the fish correctly, wifey is convinced she had done it wrong, and that our sashimi was probably a bit too big. They say anything over bite size is inappropriate but hey, we weren’t complaining!

What we initially thought wasn’t enough fish for the three of us to have as much of a snack turned out to be more than we could eat. Nevertheless, we persevered and made absolute gluttons of ourselves on the stuff. Uff! So, for €23 worth of fresh fish, some rice, avacadoes, crab and few other bits you can successfully make sushi in Ireland – a country otherwise devoid of such cuisine.