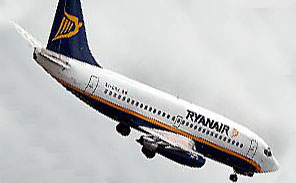 People have a lot of negative things to say about Ryanair.

Most of this criticism comes from their inconvenient baggage policies, exorbitant extra fees or occasional problems with their overworked and underpaid staff (who are probably as fed up with their employer as the passengers are). But this time they’ve gone too far.

Wifey, the munchkin and I went to board our Ryanair jet recently. We stood, ignored, at the priority boarding area with the awkward baby stroller dangling from one hand, squalling munchkin in the other and forlorn expression in between. Standing around us were other parents in similiar states of distress.

For those of you who don’t have kids or have never travelled with children, I should take a moment to explain. It’s blanket policy across all airlines in the world to allow children’s strollers (an item that must be checked as it’s too big to carry on) to the boarding gate. Once there, helpful staff will relieve the parents of the stroller and check it in the hold, allowing the parents to carry their child from the gate and onto the aircraft before other passengers board.

This is blanket policy for a good reason. Not only does it save a lot of hassle for parents by keeping children calm and manageable until boarding time, but it allows the cabin crew to manage the most difficult passengers (families with kids) first, getting them into their seats with the least amount of disruption to the other passengers, leaving the cabin crew’s attention free to address other matters during the madness of regular boarding.

But back to us. The man in the Ryanair vest announces priority boarding and we, the relieved and stressed parents, all line up politely . . . only to be ignored.

It would seem that Ryanair now CHARGES PARENTS WITH CHILDREN for priority boarding.

This was not announced as part of the priority boarding call at the boarding gate. It was not explained to us at check-in. We were not warned, nor was this offered to us to purchase as an extra, when we bought our tickets online. In fact, we actually missed our early morning flight and had to purchase tickets for a later flight at the airport.

You’d think it would have been mentioned to us then.

So whenever families with small children are being boarded the crew must take extra time to relieve them of their stroller, take it over to the baggage crew, return to the queue and finish boarding everyone else. Nevermind what happens as the families try to settle their children at the same time everyone else is getting on the plane. Madness.

This new Ryanair policy is blatant corporate green triumphing over common sense. I mean, inconveniencing airline staff and ALL other passengers AT THE EXPENSE of families with children is just wrong in every way.

C’mon Ryanair, families with kids are not the people with the money to pay for extras – THAT’S WHY THEY’RE FLYING RYANAIR. So families will not pay for this and the Ryanair experience gets worse for everyone.

Great corporate policy. I hope people start boycotting your airline until you change this absurdity.

It must be said that, in our case, a very kind and sympathetic stewardess eventually took pity on us and gave us priority boarding while venting her distain of Ryanair’s greedy new “inconvenience everyone” policy.

One of the mothers traveling with two small children (one seriously ill on his way to the UK for treatment) had a particularly awful experience – she had been ushered out of the regular check-in line when she asked about boarding early to the purchase counter to buy (what should have been complimentary) priority boarding. The delay caused her to miss her flight. No amount of protest or arguing got her anywhere with the staff. She had to purchase a new ticket for the next flight (the one we were on).

Needless to say, she was not impressed.

Did I mention that I had to help two single mothers carry their strollers and children up the stairs upon arrival in the UK because Ryanair did not dock at a gate with a lift (that’s “elevator,” to you, Mr and Mrs USA)? There was no warning that this might happen, nor accommodation made for mothers travelling alone who mightn’t be able to ascend stairs with children and strollers. After everything else that had happened, the aforementioned mother was almost in tears over her experience at that point.

To sum up: you suck, Ryanair. God help us if you should manage to get your teeth into Aer Lingus.