Roma if you want to – Roma around the town 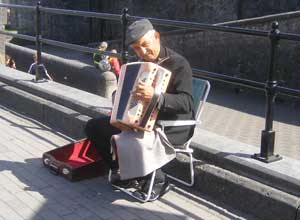 Or maybe it would be more accurate to say that Ireland has arrived.

Yes, there was a time when no one who didn’t have to came to our little rain-soaked island and the locals were all dying to get out to places more prosperous. In today’s celtic tiger world, however, Ireland is becoming a destination for anyone looking for a better life . . . or, in this case, a better hand-out.

Pictured there is a Roma accordianist busking outside Athlone Castle yesterday.

Several weeks ago a group of Roma people living on one of Dublin’s M50 roundabouts made headlines when they were forcibly deported by Irish authorities on humanitarian grounds. Those Roma were sent back “home” to northern Romania.

I looked it up, though and, according to Wikipedia, the Roma people are not Romanian. They are a Hindustani population who have been wandering the globe since they left northern India back in 1000 A.D. Heck, that puts our Irish travelers to shame in terms of itinerancy, doesn’t it?

In any case, it’s unusual to see buskers in Athlone (more’s the pity, in my mind), but more odd to see foreign buskers. I know it’s a common sight nowadays, but I recall when it was primarily Irish people busking on Irish streets. How odd that Ireland is now so prosperous people travel from abroad to sit on our kerbs and play a few tunes for coins.